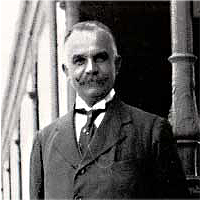 Bulgari (Founded 1884) In 1879 founder Sotirio Boulgaris immigrated to Italy and began to sell original silver ornaments in the streets of Rome. Five years later, after successfully displaying his objects in a corner window of a Greek merchant’s shop, he was able to open his first shop in via Sistina, Rome. The variety store sold silver belts, buckles, bracelets, buttons, tableware, and antiques. By the turn of the century, the enterprising businessman had established outlets in St. Moritz, San Remo, Naples, Bellagio, and Sorrento. At this time Sotirio Romanized the family name, which was changed to the present “Bulgari.”

In 1905, he sold off his chain shops to concentrate on a single jewelry and silver business. He and his sons Costantino and Giorgio opened a store on Via dei Condotti 10. The store, which remains the Bulgari headquarters today, offered an upscale selection of goods from embossed and engraved silver serving pieces to gold and silver jewelry. Gradually the Bulgari brand cultivated a cosmopolitan air, and the shift to pricier bejeweled pieces began.